Taking a Walk with Gideon Sa'ar

Today, though, the end of the day proved to be the beginning of one of the most interesting activist experiences I've ever been around.

My friend and co-worker, Ben, and I decided to take a walk down to Levinsky Park. Located right near the Central Bus Station in Tel Aviv, Levinsky Park has become a meeting place of sorts, and for some, a home, for many Sudanese and Eritrean refugees in Israel.

Today wasn't a normal day, this was not a normal 'tiyul' through the city, no. Ben had heard that the Minister of Interior, Gideon Sa'ar, would be visiting the park and the surrounding Neve Sha'anan neighborhood. With the newly-formed Netanyahu coalition, Sa'ar became the newest minister of interior, leaving his post as the minister of education.

I was glad Ben wanted to go. Not to be confused, I was not there as a representative of anyone or anything but myself; I'm here to learn about Israel — culture, problems, dilemmas, identity — no?

Come to find out, we arrived about 45 minutes early. Chatting with the refugees was delightful. Ben already knew many of them from his experiences teaching english, and even I recognized a few from work. A few of them had just returned from the Ghetto Fighters' House, a place which preserves the memory of those who fought so valiantly in places like the Warsaw Ghetto. It was a great coincidence, because through the Ghetto Fighters' House, I too first learned about the Holocaust — through the International Booksharing Project. My heart was moved when I heard about their experiences there, how much they had learned, how they too had been moved by the stories surrounding the Shoah.

It would not be the first time this evening that my heart would feel something. Finally, Mr. Sa'ar arrived at Levinsky Park, a little after 5:30 P.M. Thus began the 'balagan'. People ran in his direction, activists (refugee activists, activists from NGOs, et al.), reporters with microphones, people with DSLRs, iPhones, and on and on.

It was a free-for-all, really, whoever in the crowd had the louder voice was heard, whoever was most agile got closest. I was surprised by how few police guards he seemed to have with him.

So we walked from Levinsky Park into the surrounding neighborhood. When I say we, I mean to say the whole crowd. Hecklers came by, shouting different things, I heard 'human rights' in hebrew a few times. Shortly after we left the park, many of the people around Sa'ar pulled hats out of who-knows-where, hats that read 'immigration'. The security was suddenly much more pronounced, and yet still, many plain-clothes guards remained. Around this time, a man asked me, "Who are you?" in hebrew, to which I replied: "Nicholas. Nice to meet you." Throughout the remainder of this, he, with his backpack draped near his chest, kept eyeing me up.

So we progressed, with Mr. Sa'ar walking into a few shops, and continually stopping to talk to whoever 'seemed' to be there. One refugee later told me, 'At least he was talking to people... he came to see how it is... [the past minister of interior] had such a bad look on his face... maybe this one is better'.

Sometime around this point, a particular woman started screaming at Sa'ar. She and one of her compatriots had stickers that read 'Kahane was right' — the founder of the Jewish Defense League, classified by the United States as a terrorist organization. She had words with him at least twice, the first which I witnessed, the second witnessed by Ben. I heard her say, 'ha'medina shelanu, lo shelhem' — 'the State is ours, not theirs'. Another time, later in the tour, Ben was filming her and, she screamed at him not to, knocking his phone out of his hands.

This woman couldn't have been much older than me, by my judgment, by no means over 30. I'm not sure I can describe how she made me feel. Were her tears false? An act? It's not my place to judge it — how could I know? Most certainly, she thinks her words are the truth, and what she is saying needs to be said in order to save her country. Whatever it is motivated by, and I will purposefully neglect to give potential motivations, her behavior is certainly something to be sad about.

Besides visiting a restaurant and a few shops, Minister Sa'ar also visited an apartment, before turning back around towards the park. 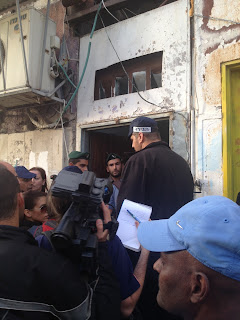 Top: a man screams at the group of refugees, reporters, and activists
Bottom: Interior Minister Sa'ar visits an apartment in Neve Sha'anan

On the way back towards the park, a refugee managed to have a few words with Mr. Sa'ar, as he'd tell me later, 'for about half a minute'. 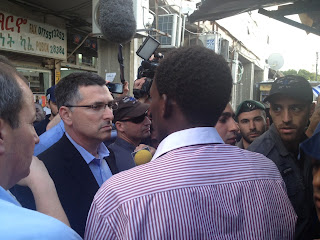 What else? A few words exchanged with some of his security people, friendly ones of course, one which got me a one-handed hug. Oh, and did I mention, the second time the 'Kahane Woman' went to talk with Mr. Sa'ar, something interesting happened. While I was being pushed back, one of his security personnel made way for her to approach him, once again. At least one refugee (maybe a few others had a word with him, I don't know) spoke with him, besides the crowds shouting 'human rights', and 'we are all refugees'.

There's also something there, in that last phrase, that really has been bothering me. The words of Isaiah (42:6) keep echoing through my head:

I the LORD have called unto you in righteousness, and have taken hold of your hand, and submitted you as the people's covenant,
as a light unto the nations.

At the very, very least, the Prophet's call has been lost upon the Israelis like 'Kahane Woman', if only for her tone.

Do not mistreat or oppress a foreigner, for you were foreigners in Egypt.

We can debate for a thousand years on the nature of terminology like 'infiltrator', we can talk until we are blue in the face about whether or not these are 'really refugees', but, at the very least, the Biblical message here is clear. The world accepts the fact that genocide happened in Darfur. The United Nations has recognized the brutality of an Eritrean regime that tortures and oppresses its people. If any country on Earth should be able to recognize the need for all sovereign nations to be open to sheltering refugees and asylum seekers — those fleeing violence — it should be the State of Israel.

"Never Again" is a convenient slogan, but a difficult one to realize. The refugee issue is a chance for Israel to put its money where its mouth is, and fulfill its biblical call: to be a light unto the nations.

Perhaps it's no coincidence that the name "Neve Sha'anan" comes from the mouth of Isaiah as well.

Popular posts from this blog

Something a Bit More Lighthearted

October 11, 2012
Before I post something from what I wrote during the journey back to Jerusalem, please enjoy: So, our quaint little apartment here in Jerusalem — 5 P.M or so. We are all sitting in our rooms, listening to music, simply relaxing. Suddenly... An odd sound fills the air, something like a chime, definitely meant to capture one's attention. I run out of my room, thinking, 'Oh no, here we go! Code red!' Thankfully, it wasn't that, but... A voice appears, and I open the door to the hallway, looking for the voice's source. Finding it not in the hallway, my attention is directed back towards a speaker in our apartment. Unrecognized until this moment by any of us, it appears to be some kind of intercom system. The voice is now speaking in very fast Hebrew, too fast for any of us to make much of anything out of it. Then... There is a pause. The voice says something like this: '... Attention... Attention... Beginning at 9 P.M to 5 A.M, there will be... ... The
Post a Comment
Read more

April 02, 2013
WHAT THE HECK HAPPENED? It started with the haircut. No, it started before that, it was not getting any sleep two nights ago. Wait, no, it wasn't then either, it started with the 'Yom Tov' (literally, good day , a religious holiday where, for the purposes of this writing, buses don't run). Wait, but not even, it was going to see someone I met at an Amnesty event in Jerusalem, yeah that was it. Like this, I could go back, and back, and back, to who the hell knows what, ad infinitum. In that case, a twenty-year story short: I figured it was a time for a haircut. So did all of the little kids at the Passover seder. Don't get me wrong, they loved that I was there and all. Justin Bieber had never been to Zikhron Yakov! From Biebs to a monk I went. Again, please don't get me wrong — the haircut was wonderful —— the experience of getting a haircut. What care, what precision, what speed! This guy was really something else. When my friend suggested the fifteen sheq
Post a Comment
Read more